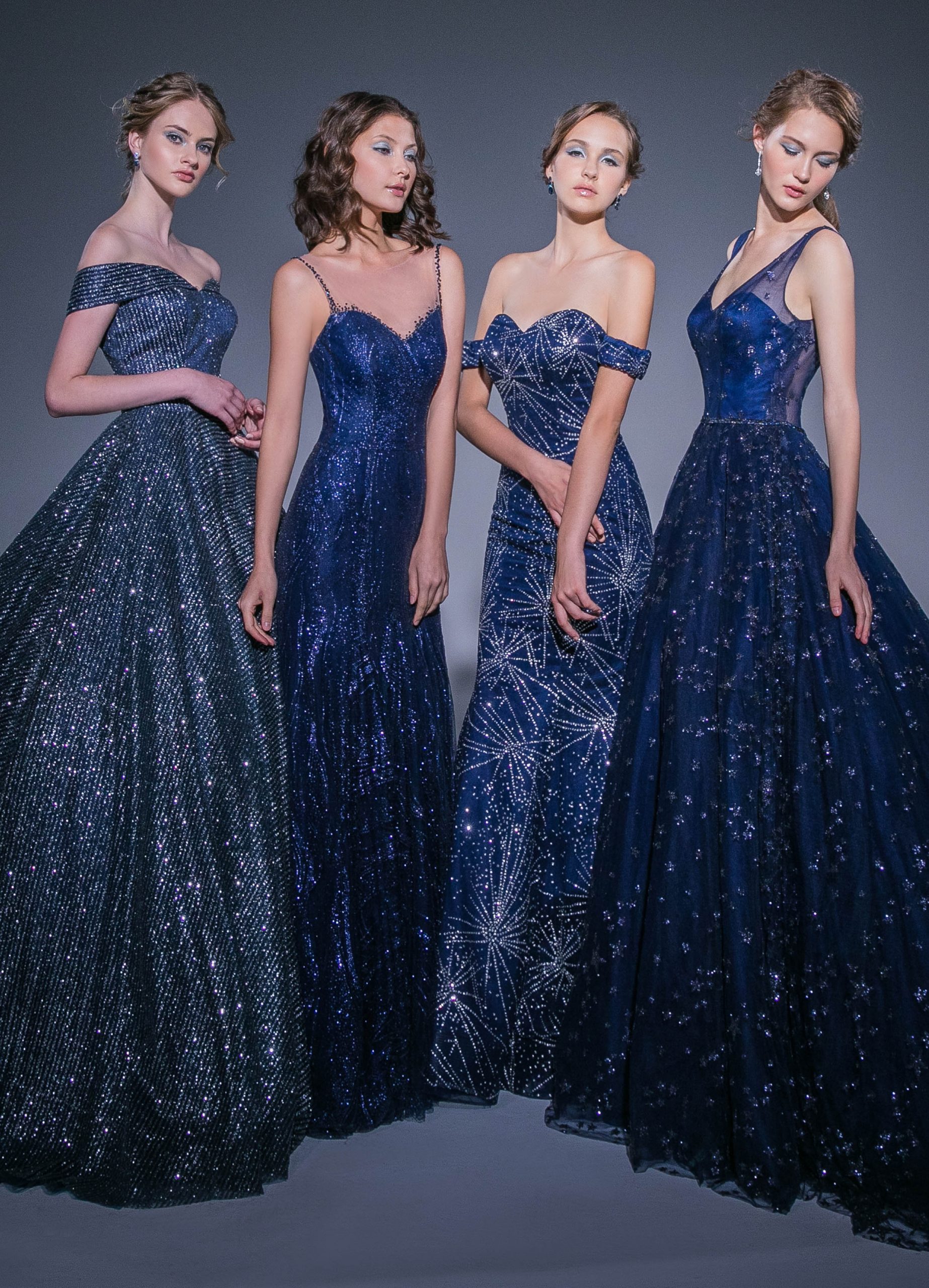 On July 20, 1969, Apollo 11 became the first crewed mission to land on Earth’s only permanent satellite. Buzz Aldrin and Neil Armstrong set foot on a surface no human had reached before. It was an epoch-making moment watched by an estimated 600 million people, crowning a decade in which the West and the Soviet Union had vied to be the first to reach the moon. The Cold War’s space race had far-reaching consequences, not only inspiring fervent conversation and uncertainty about our relationship with the cosmos, but also hugely influencing cultural output. For fashion designers André Courrèges, Paco Rabanne and Pierre Cardin, it meant devising a whole new way to dress. As we head towards the 50th anniversary of the moon landings, Ungravity looks back over half a century of design inspired by constellations, astronauts, aliens and everything else in the great unknown. 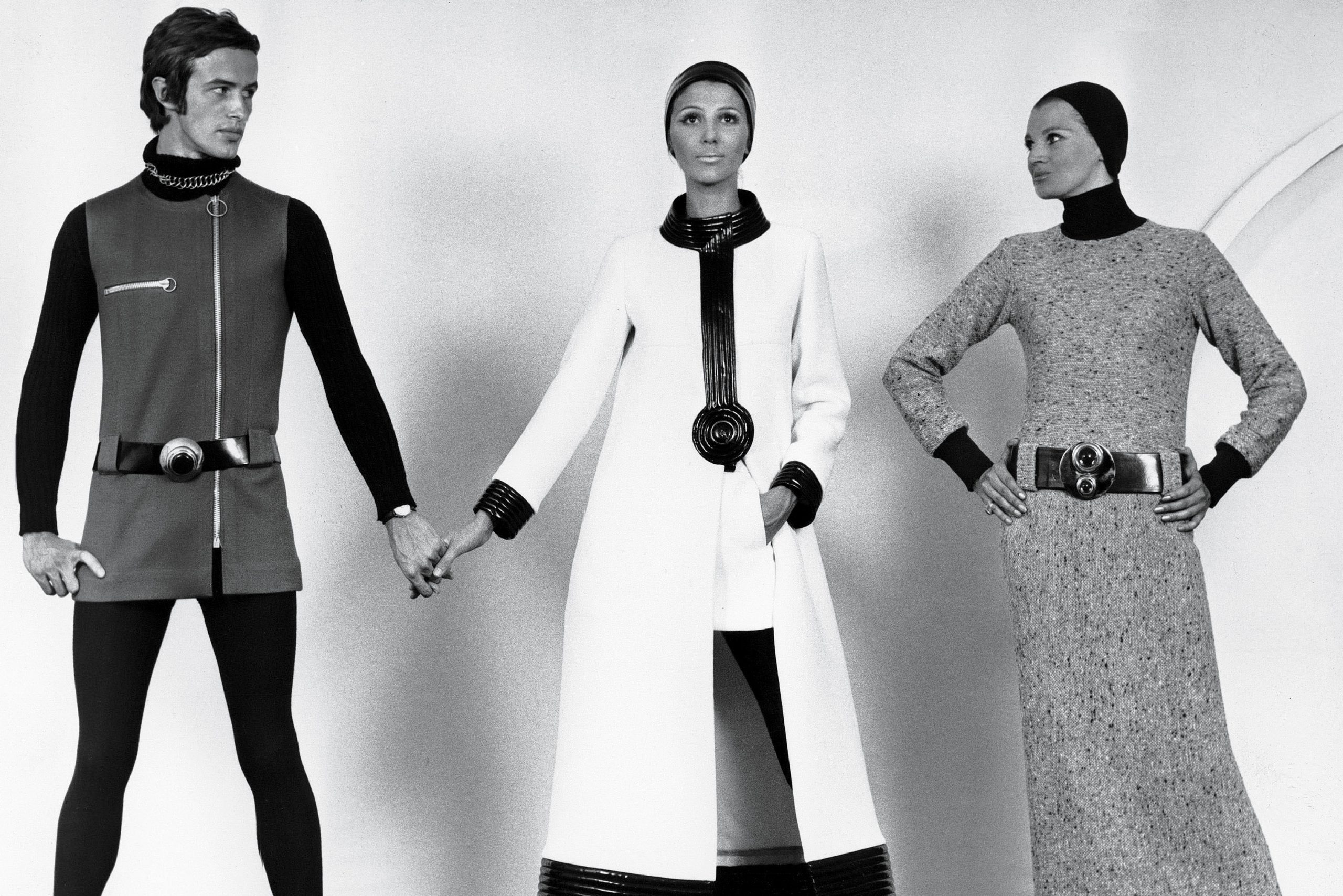 Partly credited with inventing the miniskirt (it’s a two-way tie between him and Mary Quant), designer André Courrèges was at the forefront of fashion’s preoccupation with exploring the solar system. Beginning with his “Space Age” collection in 1964, Courrèges’s lashings of white and silver quickly became part of an era-defining aesthetic. In fact, beyond thigh-skimming hems, he also helped to popularise other items that came to define the “Moon Girl” look, including flat boots, goggles and trouser suits, as well as garments made from wipe-clean PVC. His obsession with comfort, innovation and forward-looking design continued through to the moon landings and beyond – he even made a mirrored all-in-one to commemorate the much-anticipated landings. It was a fashion fixation that found its way into all sorts of high places; Courrèges even received a personal invitation to visit NASA’s mission control at Cape Canaveral.

In the hands of Spanish designer Paco Rabanne, the Space Race became perfect stimulus for envisioning an avant-garde future. Working with a series of innovative materials – including paper, plastic and, most famously, metal – Rabanne’s designs often resembled very beautiful (and sometimes scanty) armour from a mysterious universe. Playfully claiming to have “travelled to Earth from the planet Altair to organise civilisation on this planet 78,000 years ago”, Rabanne’s art-clothing hybrids allowed for a particularly evocative form of time travel, bringing suggestions of medieval-era chainmail and other historic attire into an uncertain modern age. His daring cutaways and pioneering methods of construction featured in the 1968 sci-fi film Barbarella and have been copied many times over the decades – updated versions of his chainmail dresses have been sported by celebrities including Paris Hilton and Bella Hadid, while a recent reissue of his much-beloved 1969 metal bag was an immediate hit.

In line with his 1960s peers, Pierre Cardin’s output took on the challenge of heading out into the universe. With a love of unusual design details (think vinyl, oversized zips, geometric patterns and body stockings) and an architectural approach to proportion, Cardin’s clothes were enchanting and humorous in equal measure. His 1969 show titled “Space Age and Futurism” was heavily influenced by the fervour around the moon landings, featuring shiny capes and dresses with rocket-style flaring at the hem. Like Courrèges, he was also given a tour of NASA – becoming the first civilian in the world to try on Armstrong’s famous spacesuit when he allegedly bribed a security guard into giving him access. The experience left such a deep impression on the designer that he went on to create his own spacesuits for NASA, and in 2000 he said he still dreamed about having a house on the moon.

Thierry Mugler’s dramatic proportioning and human-cyborg fantasies owe a clear debt to 1960s space-age designers. His models frequently looked like fearsomely alluring beings from another planet (no surprise that his perfume was called Alien), with plenty of Paco Rabanne-style metal armoury and daringly cut dresses. The late 1970s was a particularly outer space-focused time for the designer – from tinfoil-shiny, silver, pleated dresses through to belted, gold spacesuits complete with helmet-style headgear. The latter, found in his autumn/winter 1979 collection, looked simultaneously backwards and forwards, combining classic 1960s futurism with foreshadowing of 1980s decadence.

Alexander McQueen’s designs frequently alluded to imagined spaces – not least in his memorably unsettling final show, which featured futuristic visions of Plato’s Atlantis complete with animal-human-oceanic hybrids. However, perhaps his most space age-y moment came during his tenure at Givenchy, with his autumn/winter 1999 collection riffing on technology, androids and an uncertain future on the eve of Y2K. As with designers of earlier decades, McQueen transformed this potent mix of anxiety and possibility into a series of forward-looking, bold-shouldered garments. Models with severe bobs strode down a metallic runway clad in shiny, sci-fi fabrics, moulded body casts, Blade Runner-esque fur coats, knee-high go-go boots and even circuit boards, some of which were elaborately embroidered. Others, startlingly, were wired up with real, flashing LEDs – a clever merging of clothing with machine, illuminating what might lie ahead in disconcerting style.

Space has long ignited pop culture’s imagination – from sci-fi books to long-standing film franchises to concept albums – leading to a particularly rich glut of reference points for designers to draw on, too. In the case of Balenciaga’s spring/summer 2007 collection, this included Nicolas Ghesquière citing movies The Terminator and Tron as inspiration, but also seemingly making some not-so-subtle nods to expansive space opera Star Wars in a series of gold, armour-style leggings that could have been lifted straight from the legs of protocol droid C-3PO. Shifting through various appearances (and reassembled machine parts), and possessing the ability to speak in over seven million forms of communication, C-3PO has proved to be something of a slow-burn style icon. Rodarte also featured him with R2-D2 on a gown in its autumn/winter 2014 collection, alongside fellow characters Luke Skywalker and Yoda.

Like the designers of the 1960s, Hussein Chalayan has also found himself preoccupied with futurism – and the implications of what we might wear in a much-changed universe. For spring/summer 2007, Chalayan not only presented his much-feted bubble dress, but also took show attendees through a rapid sartorial history lesson via six garments that changed in front of watchers’ eyes. His technical wizardry, developed by the same team who worked on the special effects in the Harry Potter films, allowed clothes to bloom and transform on models, changing from Victorian get-ups to short gowns, diaphanous baby-doll dresses to beaded affairs, and in one instance, from a 1950s-housewife-on-a-space-ship ensemble (complete with wide-brimmed hat) to a heavily Paco Rabanne-influenced metallic shift and helmet with visor. Each metamorphosis was met with awestruck applause as Chalayan once again pushed the boundaries of form and function via his otherworldly flights of imagination. 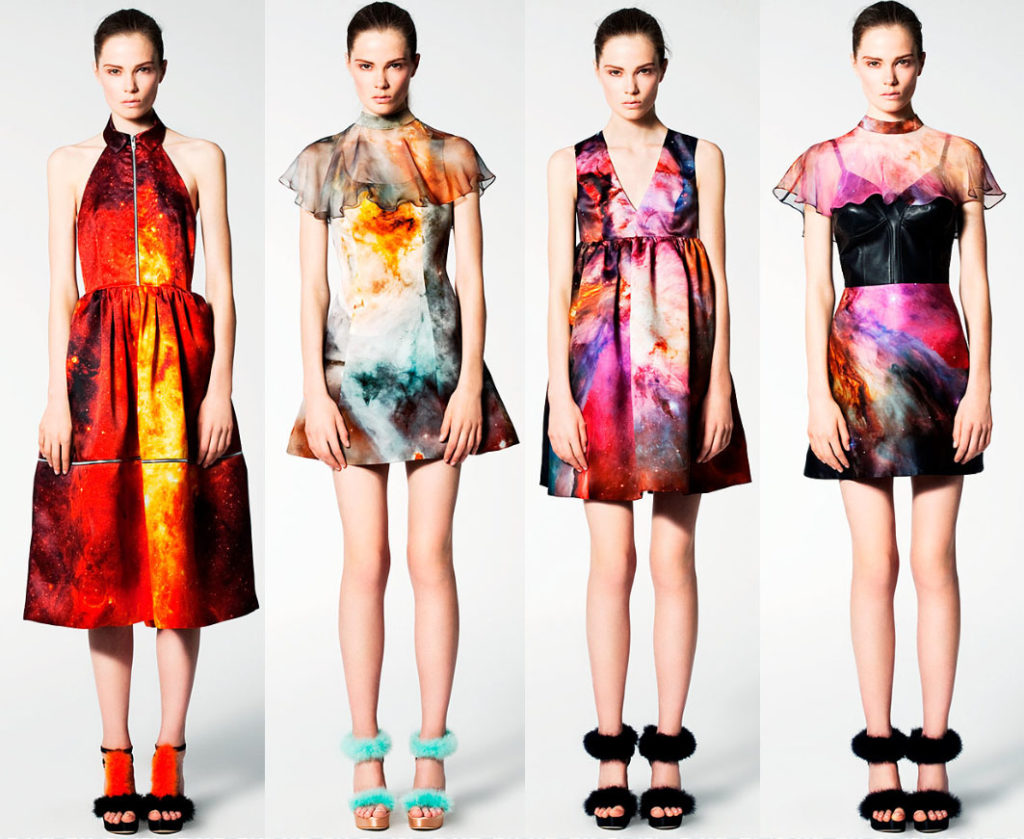 Technological advance has provided other sartorial possibilities too – not least the ability to both witness and capture the often jaw-dropping evidence of what lies far beyond our planet. The early 2010s saw a glut of galaxy prints, the colours of the cosmos scattered across dresses, T-shirts, bags and every other available surface. The explosive popularity of this particular pattern can be traced back to one source: Christopher Kane’s 2011 resort show. Titled “Into the Galaxy” and featuring images of flaring nebulae captured by the Hubble Space Telescope, Kane’s designs turned these dazzling displays into immediately desirable garments. Black leather detailing played off against chiffon printed with orange flashes, glittering pinks, cool turquoises and deep-sea blues. From a distance the eye might interpret these patterns as anything from marbled ink to roaring fires. Up close the galactic fireworks proved even more mesmerising to observe.

The question of clothes in space isn’t just centred on abstract inspiration, it’s a very practical one too. After all, anyone who makes it beyond Earth’s atmosphere is entirely reliant on their attire to keep them alive. And in an age of potential space tourism, the next stage of spacesuit development is crucial and full of intricate considerations. These concerns probably weren’t at the forefront of Raf Simons’s Dior couture show for autumn/winter 2014, but his designs certainly showed an awareness of the sartorial implications of space travel. Choosing, like Chalayan, to juxtapose designs delving into centuries worth of history with more futuristic fashions, Simons presented a series of silk-taffeta flight suits, glittering embroidery undercutting their utilitarian shapes. There was an echo of Simons’s forerunner John Galliano in them too – the designer took his bow in a full astronaut suit at Dior’s couture show in 2006.

It’s perhaps no surprise to anyone who ever dreamed of becoming an astronaut to hear that the use of NASA’s distinctive branding has grown rapidly in recent years. Harnessed by designers from Heron Preston to Coach, as well as high-street chains including Urban Outfitters, it was also riffed on for Donatella Versace’s autumn/winter 16 menswear show with NASA-style patches and badges scattered among the zodiac prints and shiny bomber jackets. Switching up the space agency’s immediately recognisable red, blue and white designs with Medusa heads, muscled torsos and embroidered constellations (all complete with the word “Versace”, of course), the collection made for an enjoyably camp take on the familiar iconography of space travel.

Ever the showman, for Chanel’s autumn/winter 2017 show Karl Lagerfeld went interstellar with a catwalk featuring a Chanel-branded rocket. Unwittingly coinciding with news from NASA that there might be life-supporting planets in solar system TRAPPIST-1, Lagerfeld presented a beguiling vision of a rather chic life beyond Earth. The usual tweeds and pearls were given a cosmic twist, with glittery black-toed moon boots, translucent astronaut prints, metallic trench coats, quilted foil capes and several sequinned gowns mimicking the starriest of skies. The models’ bouffant semi-beehived hair and exaggerated lashes paid appropriate dues to Lagerfeld’s 1960s predecessors, while the silver backpacks suggested a traveller ready to take off at any minute. At the finale it was the omnipresent rocket that appeared ready to head for the moon though, with an impressive pyrotechnic display accompanied, of course, by Elton John’s “Rocket Man”. 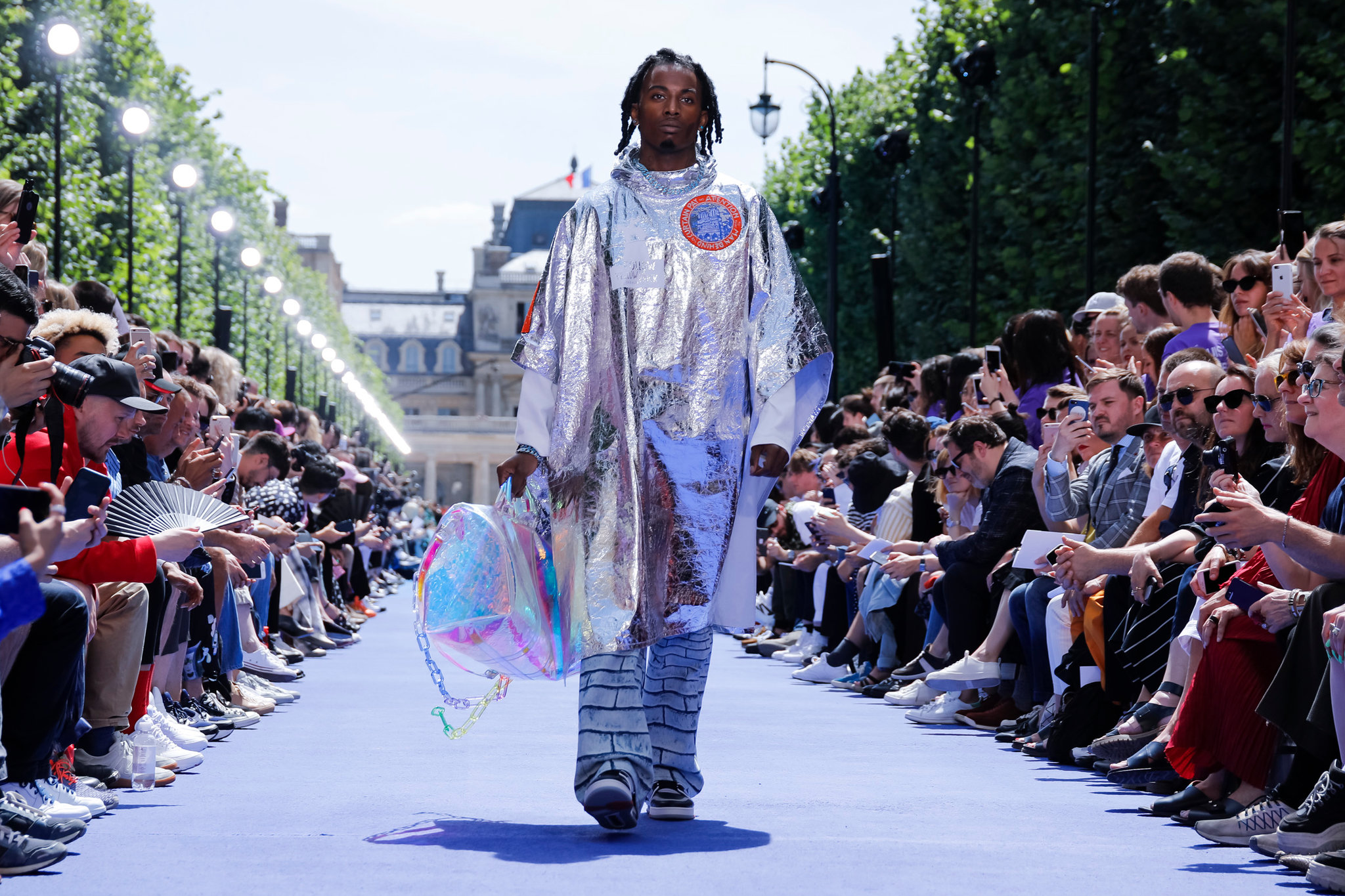 Louis Vuitton has had something of a love affair with all things galactic in recent years. Following on from its own rocket on the catwalk the previous season, spring/summer 2019 featured many of the hallmarks of classic space-age style, including silver paillettes and architectural white helmets. Alluding to his own long-standing interest in futuristic silhouettes, Ghesquière’s angular tailoring, exaggerated sleeves and peekaboo prints with glimpses of sophisticated spacecraft and imagined planetary landscapes culminated in three floral spacesuits. And it’s not just Ghesquière who’s retained an interest in the solar system at the house. Prior to his tenure, Louis Vuitton navigated the ongoing allure of space travel several times – most notably in its core values campaign of 2009, with ads shot by Annie Leibovitz featuring Apollo 11’s Aldrin, Sally Ride (the first American woman in space) and Jim Lovell (commander of Apollo 13, and the first person to fly in space four times).

With her distinctive 3D printing techniques and use of materials that push the edge of what can be put on a body, Iris Van Herpen’s technologically advanced designs are the stuff that contemporary space-age dreams are made of. Often described as “hi-tech” and “sci-fi”, Van Herpen’s 2019 couture collection took explicit inspiration from outer space – the designs partly based on a 17th-century star atlas titled Harmonia Macrocosmica. A gorgeous collection of celestial cartography attempting to chart what could be seen beyond the naked eye, it’s a pertinent reminder of humanity’s enduring fascination with the cosmos. In the hands of Van Herpen this led to fantastically futuristic organza dresses (designed in collaboration with former NASA engineer turned artist Kim Keever), lots of sinuous, shivering layers and a colour palette that stretched through the sky’s many shades from milky dusk to orange dawn to deepest, bluest midnight. 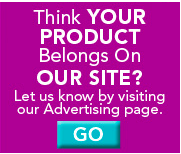 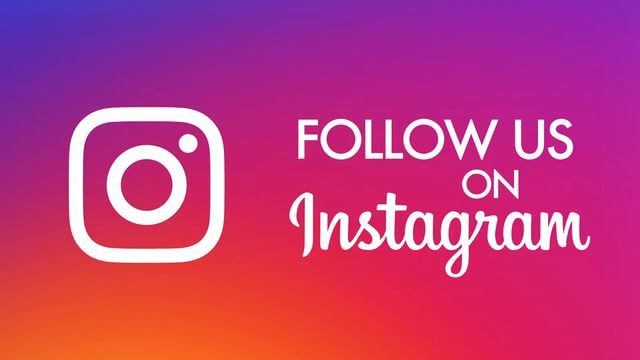